J.T. BARRETT IS on the ground, staff and teammates surrounding him. Even Michigan QB Devin Gardner has taken a knee by his side. Soon, with an air cast in place, arguably the best player in the Big Ten is loaded onto a cart and driven off the field. Barrett's season is suddenly, shockingly, done. But the game against archrival Michigan in Week 14 is not, so Ohio State offensive coordinator Tom Herman can probably be excused for his in-the-moment tunnel vision. "At the risk of sounding callous," Herman says, "we had to convert a third down. I was worried about getting a first down."

That first down didn't happen. But Barrett's replacement, Cardale Jones, would guide the team to a win, Ohio State would cruise into the Big Ten championship game, and Herman and coach Urban Meyer would end up with a familiar puzzle: how to win the Big Ten -- and more -- with yet another backup quarterback.

In August camp, Braxton Miller, a preseason Heisman contender and a three-year starter at quarterback, tore the labrum in his right shoulder, terminating his season before it began. Barrett, a redshirt freshman who hadn't played a down since high school, more than filled in, setting the Big Ten record for touchdowns in a season (45), held previously by Drew Brees ... until Barrett's year ended against the Wolverines with a fractured right ankle. When the quarterback job fell to onetime third-stringer Jones, with just a week to prepare for Wisconsin in the conference title game, Ohio State's coaches and players approached the situation with composure. By now, upheaval is simply part of the routine for them. 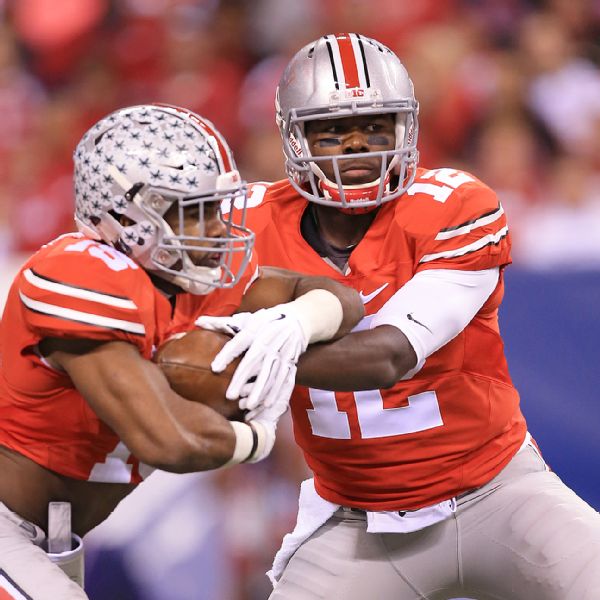 "We teach our guys to compartmentalize what's going on in your life," Herman says. "I told our guys we could feel bad for J.T. that his really good season has ended. But we couldn't let the two compartments bleed into one another."

During the Big Ten championship game in Indianapolis, Ohio State's compartments appeared watertight. "We put all our faith in preparation leading up to that game," Jones says. "There's nothing we can't do with the proper preparation." He might be right. Ohio State accomplished its most complete game of the season, hanging 59 points on Wisconsin, surrendering none. Jones averaged just three completions per quarter (going 12-for-17 overall), but he maximized their effect, throwing for 257 yards.

Unlike his predecessor, Jones had the luxury of relying on a strong supporting cast. When Barrett took over before the team's first game, against Navy, there were only four returning starters on offense and doubts galore. After an uneven performance, those doubts intensified in a two-touchdown Week 2 home loss to Virginia Tech. But by the time Jones stepped in and beat Wisconsin, an entire season had passed in which Ohio State averaged 45.2 points, good for fourth in the country. "The team around [Jones] is so much better than J.T. had to deal with," Herman says. "The only real adjustment we made was to take as much off Cardale's plate mentally in the run game, with all of the checkdowns. This time around, you kind of knew, 'hey, as long as he doesn't wet the bed ...' "

On the contrary, Jones exhibited poise. On just his third pass against Wisconsin, off a fake quarterback draw, Jones threw the first of three long touchdown passes to Devin Smith (39, 44 and 42 yards). So much for redacting the playbook for a first-time starter. "I knew he had the talent to throw the ball and execute, but I figured there would be first-game jitters," Meyer said at the news conference following the win. "There was none of that."

In the wake of Ohio State's undoing of Wisconsin, and with the Buckeyes now preparing to face Alabama in the first College Football Playoff, the question remains: How can Meyer and Herman plug in different quarterbacks and keep rolling?

Beyond the talk of "buying in" and "the system" and "the culture," which permeated the postgame locker room in Indianapolis, there might be -- for this year's team at least -- a more tangible explanation. Take former Ohio State QB Kenny Guiton, who played this past season with the LA Kiss of the Arena Football League and filled in for an injured Miller in several games during the 2012 and 2013 seasons. Guiton helped keep Ohio State's perfect 2012 season intact; in 2013, when he started two games, he set school records for passing efficiency and completion percentage. "I talked to KG, knowing he had been through that situation," Barrett says. "We all definitely have the ability -- but are you good enough? KG prepared each week like he was the starting quarterback, making sure that he was ready individually at any given time." 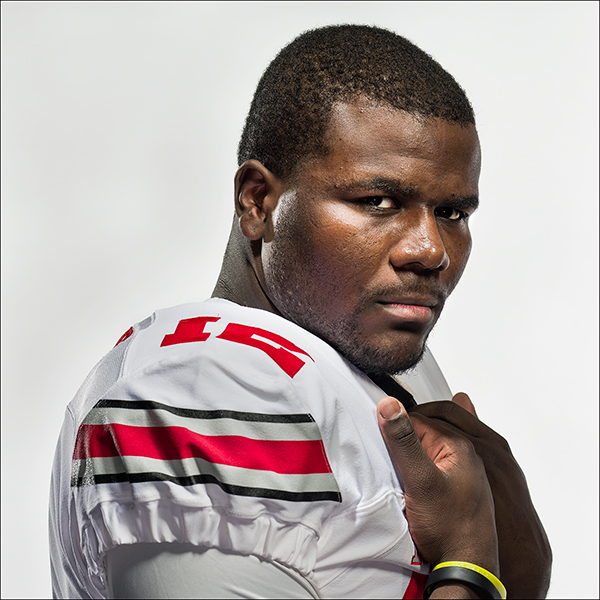 This season Jones played that part, ready and waiting. When Barrett sprained the MCL in his left knee in the first half against Penn State in Week 9, his thoughts drifted from his welfare to that fact. Barrett says, "I started thinking to myself for a hot second before halftime, 'Is it better for me to stay in the game and have a tweaked knee, or would it be better for the team that Cardale comes in to play, knowing that he's healthy?' " He remained in the game, leading Ohio State to a double-overtime win. But the fact that he considered removing himself, and that he's forthcoming enough to share those thoughts, may shed light on how Ohio State has been able to overcome challenges that could short-circuit many talented teams. After all that's happened, there's little doubt another redshirt freshman, Jalin Marshall, an H-back for the Buckeyes but a quarterback in high school, will be ready should Jones need a backup against Alabama.

Still, however tightly knit, a team is a collection of individual strands that may fray on occasion. After his injury, Miller was away from the team during Barrett's crash course in starting. Not only did Miller have to endure surgery and the challenges of recovery, but he also had to deal with the added uncertainty of his NFL prospects. Without Miller to mentor him, and days away from his first start, Barrett struggled to fully grasp the challenge at hand. "There's a lot going through your mind being the starting quarterback for a top-five team," he says. "Braxton wasn't there, which was cool because everybody has their own problems, and his were bigger than mine. Braxton was going into his senior year. He was this Heisman hopeful. I have no idea what that was like for him."

But Barrett had a better idea of what it was like for Jones and knew how a sudden starter could use a sympathetic ear. "When I got hurt, I was bummed," Barrett says. "But I'm a redshirt freshman. I have more time. I just wanted to be a person to listen to Cardale." The day before the Wisconsin game, the two quarterbacks had a lengthy talk. Barrett politely declined to elaborate on the specifics.

After that game, all three quarterbacks gathered in the locker room, Jones cradling the MVP trophy. As photographers documented the moment, one had to wonder: How is this situation going to sort itself out next fall, when all three presumably will be healthy?

The Ohio State offense has operated most productively with Barrett under center, his decision-making and throwing ability appearing most suitable to Meyer's system. But Miller, a two-time Big Ten MVP, is the most dynamic athlete in the conference and has three years of starting experience. And if Jones guides Ohio State to two more wins, he will be impossible to disregard. Recovery schedules will play their part, and Barrett appears to have the edge there too; he should be ready for workouts a couple of months earlier than Miller.

There is already speculation that Miller might be asked to fill the Percy Harvin role that Meyer carved out at Florida, taking advantage of Miller's running ability, getting him the ball in space. Meanwhile, equally voluble conjecture has Miller transferring. Scheduled to graduate with a degree in communications this month, he would be eligible to play elsewhere next season.

All this is little more than end-of-season gossip, with few hints forthcoming from the principals. Herman asserts that he and Meyer haven't discussed next fall yet. ("I literally have given it zero thought," he says. "I don't want to deal with hypotheticals.") And it looks as if he, at least, won't have to. Thanks in part to the performance of his three quarterbacks, Herman won this year's Broyles Award as the country's top assistant, making him a valuable commodity on the coaching market. His next stop will be Houston, where he'll get his first crack at a headcoaching job.

Back in Ohio, one person who is contemplating next year is Barrett. "Me and Braxton, we talk about it," he says. "This is a unique deal. It's rarely seen. We're deep at quarterback. When I think about spring ball or fall camp, I just think about trying to outwork those guys." He'll have his chance. And assuming Miller stays, Ohio State will move forward with the best three QBs in the Big Ten. A precarious embarrassment of riches. 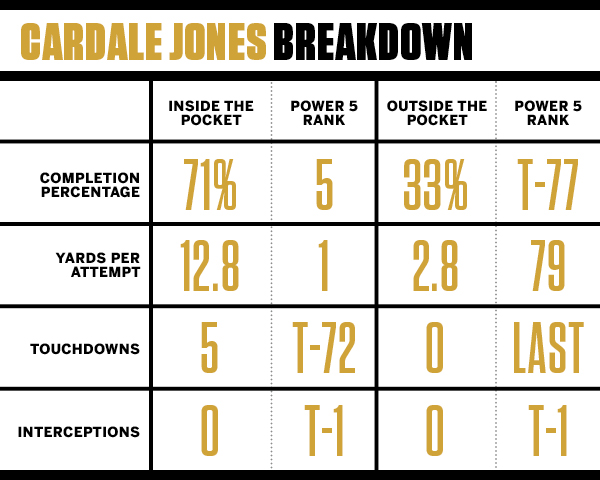