David Egan is looking forward to his first Breeders' Cup ride aboard Group 1 winner Teona on Saturday and he will have a busy schedule in Del Mar with surfing lessons lined up for him by a fellow jockey.

Teona beat dual Oaks winner Snowfall in the Prix Vermeille last month before missing the Prix de l'Arc de Triomphe to head to the Breeders' Cup, where she is entered in the Turf and Filly & Mare Turf.

However, her trainer Roger Varian has given his strongest indication yet that she will take on the boys in the Longines-sponsored Turf, which is her first preference on the final day of the two-day fixture.

On riding at his first Breeders' Cup, Egan said: "I’ve ridden a winner in the US before but I’ve never been to the West Coast. I’m very much looking forward to the trip and I’ve been lined up for surfing lessons with Jose Ortiz on Wednesday, which sounds like a lot of fun.

"It’s not every day you can go racing and surfing and evidently Jose is very good at it. It will be my first time at the Breeders' Cup and also my first time on a surfboard so there’s plenty happening." 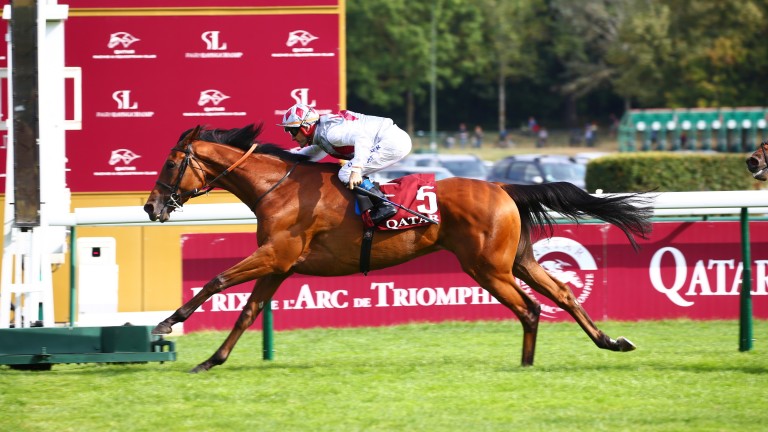 Olivier Peslier was on board when Teona struck at Longchamp but Varian confirmed Egan would reunite with the three-year-old filly, having ridden her twice, including in the Oaks at Epsom in June.

"Teona will be left in both races but it's very likely she'll run in the Turf," said Varian. "It's over a mile and a half which suits her better than the Filly & Mare, which is over a mile and three furlongs.

"If she goes in the Turf, David will ride as Olivier, who rode her to win the Prix Vermeille last time, won't be able to do the weight. It will be a first ride at the Breeders' Cup for David, but he didn't do a bad job when winning with his first ride in the Saudi Cup earlier this year."

Teona is a general 7-1 chance to pick up a second top-level success in the Turf – with the betting headed by the Dermot Weld-trained Tarnawa at 11-8 – while she is 6-1 generally for the Filly & Mare Turf.

Oisin Murphy: maybe I'll let Marquand and Buick have a go at title next year

Surf and Turf! Egan set to hit the board before Breeders Cup bow on Teona

Read Surf and Turf! Egan set to hit the board before Breeders Cup bow on Teona by Racing Post

A shortage in substitute teachers

Read A shortage in substitute teachers by KPBS

How sweet it is as Breeders’ Cup returns to Del Mar